The 6th ICTAP Attended by Delegations from Seven Countries 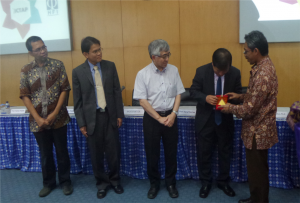 Department of Physics in cooperation with the Indonesian Physical Society (HFI) Chapter Makassar hosted The 6th International Conference on Theoretical and Applied Physics. The Conference was held in conjuction with the 29th National Physics Symposium. These are annual events of the Indonesian Physical Society, which is for this year mandated to HFI Makassar and the Department of Physics, University of Hasanuddin.

There were approximately 100 delegates from seven countries, namely Japan, Korea, Thailand, India, Morocco, Malaysia and Indonesia. The event was oficially opened on October 20, 2016 by Vice Rector for Collaboration and Innovation, Prof. Budu, representing the Rector of the University. The Rector in his written speech expressed an appreciation to all the participants, especially the plenary speakers and the foreign participants who have made an effort and come to Hasanuddin University. With this seminar, University of Hasanuddin certainly get direct benefit, especially to extend the network of collaboration for researchers at Hasanuddin University, said Rector.

After the opening, the Vice Chancellor signed a Cooperation MOU between Unhas and Synchrotron Light Research Institute (SLRI). The Institute is the research institute belonging to ASEAN based in Thailand. International cooperation agreement will allow researchers at Unhas using Synchrotron facility, a sophisticated spectroscopic instrument capable of providing information three-dimensional molecular structure of the material being studied.

The event then continued to the plenary session with speakers respectively are Prof. Jae Hee Kang (Korea), Prof. Yutaka Okabe (Japan), Prapong Klysubun, PhD (Thailand) and Prof. Halmar Halide (Indonesia). This session was chaired by by Dr. Alimuddin Hamzah Assagaf. Plenary session run from 09.30 until 12:00. Parallel sessions held starting at 13:30, after the lunch break. There are seven rooms in parallel, respectively roms for: theoretical physics and Computing, Physics Materials, New and Renewable Energy, Medical Physics, Optics and Instrumentation Physics, Geophysics and Physics Education. In each room there is an average of 10 speakers, with the allotted 15 minutes. Parallel session ended at 17:00 o’clock pm. The event was closed by the Dean of the Science Faculty, represented by Prof. Ivan Aziz, as Deputy Dean. The participants then took a picture with background Unhas Lake, right in front of Science and Technology Building,
the venue of the event.